The Nigerian Army has denied reports claiming the Chief of Army Staff, Lt. Gen. Tukur Buratai, is the sponsor of the non-governmental organization, Centre for Africa Liberation and Socio-Economic Rights (CALSER).

The organization on Wednesday, November 4, had a press conference where they gave Amnesty International, a global rights group, a seven-day ultimatum to leave Nigeria. Read here.

Sahara Reporters while publishing the report, alleged that Buhartai was the sponsor of the NGO.

The Army in its reaction described the claim as ”Fake News”. 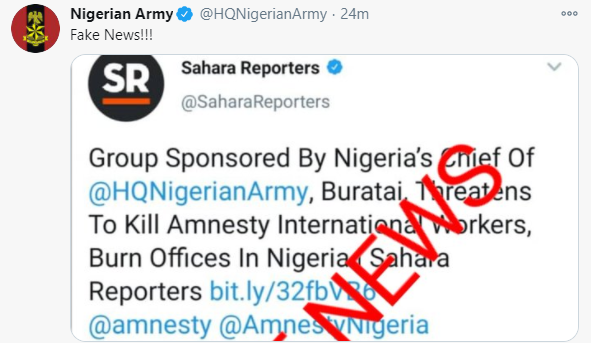 Memo to Sambo Dasuki on 4th Year in Illegal Detention and...

Legal clouds gather over US cloud services, after CJEU ruling