Two terror attacks have hit France, the first at the Notre Dame basilica in Nice and the second in Avignon.

The first picture has now emerged of one of the three Christians killed in a church in Nice during an Islamist terror attack today, October 29.

Vincent Loques (pictured above), 45, a sacristan of the Notre Dame basilica in the city of Nice, was killed as he prepared for the first Mass of the day after 21-year-old Tunisian migrant Brahim Aoussaoui attacked the church. 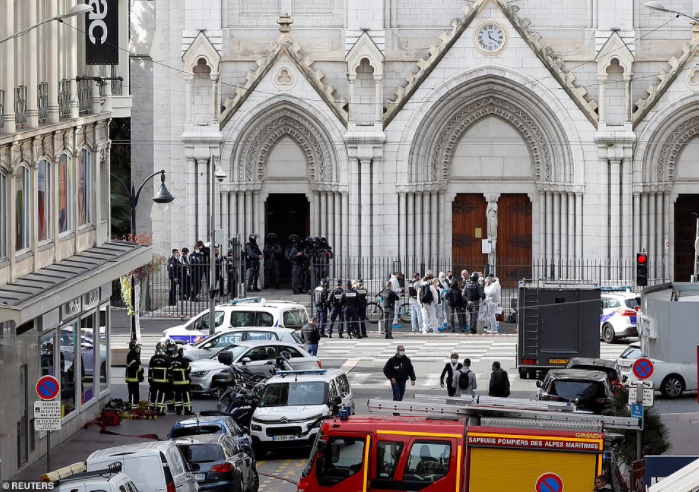 French anti-terror prosecutors said Aoussaoui attacked worshippers in the heart of the Mediterranean resort city with a foot-long blade, slitting the throat of an elderly woman in an apparent beheading attempt.

A mother in her forties also succumbed to her injuries after seeking refuge in a nearby bar.

The Islamist was shot 14 times and wounded by armed police as he screamed “Allahu Akbar” during the attack and “even while under medication” as he was taken to hospital, Nice’s Mayor Christian Estrosi said.

Aoussaoui arrived in Nice at around 6.30am via the railway station, where he quickly changed his clothes, Jean-Francois Ricard told journalists today.

CCTV then showed him arriving in the church at 8.30am and staying there for nearly half an hour.

The assailant, born in Tunisia in 1999, entered  Europe via the Italian island of Lampedusa on September 20 and arrived in Paris on October 9. The travel information came from a document on Aoussaoui from the Italian Red Cross, the state prosecutor said.

Investigators found two unused knives, a Koran, two mobile phones in addition to a bag with some personal effects. He was unknown to French security services, Mr Ricard told a press conference.

Mei-yan,, an Influencer and her baby tied and held at knifepoint as robbers invaded her home after she flaunted valuables on social media

AlkassiM Adams missing, two others killed for their Conversion To Christianity