The Nigerian police has reacted to the viral video of a man smoking shisha in public while wearing police uniform.

The video was circulated with a caption claiming the man is a police officer.

Reacting to the video, the Nigerian police promised to investigate to find out if it is indeed a police officer, a skit/movie scene, or a civilian dressed in police uniform. They promised to take action after the investigation and asked members of the public with information to reach out.

“The investigation will amongst other things seek to forensically establish the authenticity of the video, the true identity of the man in the uniform – whether he is in fact a policeman, an impostor or an actor in a movie scene.

“However, while not being prejudicial to the ongoing investigations, it is necessary to state that the character exhibited by the man in the uniform is not a true reflection of who we are as a regimented law enforcement agency – our trainings, discipline, norms and tradition.

“Meanwhile, members of the public with useful information that can assist police investigations are enjoined to provide same via the following; pressforabuja@police.gov.ng, or DM on our social media platforms. 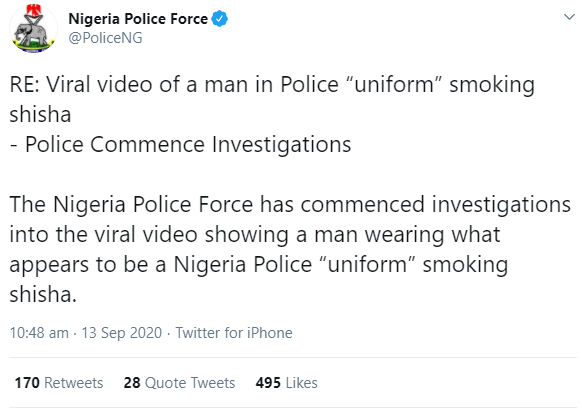 ‘How Britain’s exit from EU will benefit Nigeria’

Barbados, set to remove Queen Elizabeth II as the Head...

FBI: $15.3 million stolen by Hushpuppi’s ally Woodberry from US companies...