Former Presidential spokesperson, Reno Omokri has reacted to report of DSS’ invitation to former deputy governor of Central Bank of Nigeria and former presidential candidate of the African Democratic Congress (ADC) Mailafia Obadiah over his claim of a Northern Governor being one of the commanders of Boko Haram.

In tweets he shared, Reno Omokri stated that the DSS should be inviting Governor Nasir El-Rufai of Kaduna state.

Anybody who thinks that Obadiah Mailafia is an alarmist, should read these headlines from 2012 and 2014. Mailafia is not saying anything that herdsmen and Boko Haram have not said? That is why General @MBuhari  is releasing and pampering ‘repentant’ Boko Haram

Nasir @ElRufai l admitted on TV that he paid killer herdsmen not to kill in S Kaduna. His admission is in contravention of The Terrorism (Prevention) Act 2011. If Nigeria had a functioning government, El-Rufai should be in the jailhouse, not government house!

Some say Mailafia’s words may spark Rwandan style genocide in Nigeria. Calling a spade a spade wont lead to Rwanda. What is happening in Southern Kaduna is ALREADY like Rwandan genocide. Herdsmen kill Christians and @Elrufai  pays them. What do you call that? he wrote 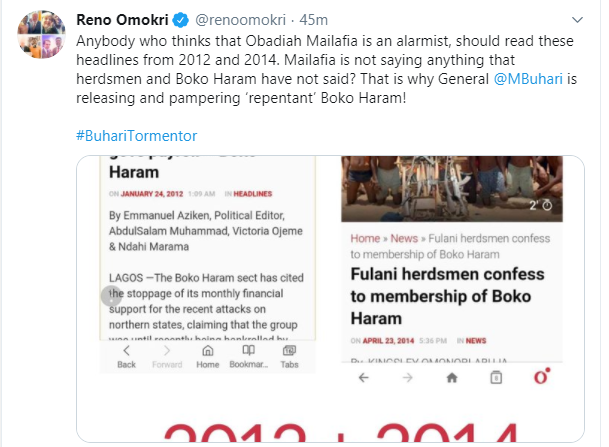 Kim Yo-jong, set to take over North Korean leadership as her...

FLASH BACK : Daddy Freeze’s Fiancée, Benedicta Got Pregnant For Him...

SpaceX, the US space transportation company is launching another batch of...

”I am still married to FFK” – Wife