The Minister of Justice and Attorney General of the Federation, Abubakar Malami has ordered the Inspector General of Police to provide security for the 17 Edo All Progressives Congress Lawmakers who impeached the House of Assembly’s Speaker and Deputy Speaker.

Malami who said the security measure is necessary to prevent breakdown of law and order, said the directive became neccessary following a petition dated August 5 and filed by Idahosa-West Chambers. 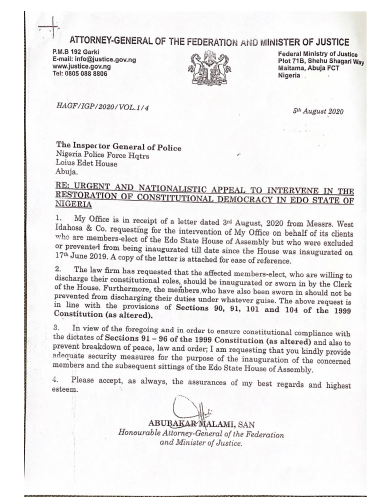 LIB reported earlier that the 17 lawmakers are loyal to former APC Chairman, Adams Oshiomhole and are also backing All Progressives Congress (APC) Governorship candidate, Pastor Osagie Ize-Iyamu. Only seven lawmakers in the Edo state house of assembly are loyal to Governor Godwin Obaseki.

FLASH BACK : Daddy Freeze’s Fiancée, Benedicta Got Pregnant For Him...

How a backyard swimming pool can become an electrical death trap

President Trump rushed out of press briefing after ‘armed suspect’ is...