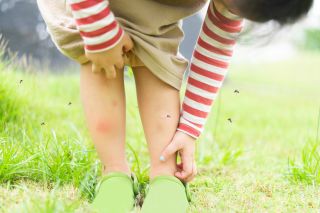 Some people can sit outside all summer long and not suffer from mosquito bites. Others turn into an itchy mess despite bathing in DEET and never leaving the purple glow of the bug zapper. What gives?

It’s mostly about the invisible chemical landscape of the air around us. Mosquitoes take advantage of this landscape by using specialized behaviors and sensory organs to find victims by following the subtle chemical traces their bodies leave behind.
In particular, mosquitoes rely on carbon dioxide to find their hosts. When we exhale, the carbon dioxide from our lungs doesn’t immediately blend with the air. It temporarily stays in plumes that mosquitoes follow like breadcrumbs. [Why Do Mosquitoes Buzz in our Ears?]
“Mosquitoes start orienting themselves to those pulses of carbon dioxide and keep flying upwind as they sense higher concentrations than the normal ambient air contains,” said Joop van Loon, an entomologist at Wageningen University in the Netherlands. Using carbon dioxide, mosquitoes can lock onto targets from up to 164 feet (50 meters) away.
Things start getting personal when mosquitoes get about 3 feet (1 m) away from a group of potential targets. In close quarters, mosquitoes take into account a lot of factors that vary from person to person, including skin temperature, the presence of water vapor and color.
Scientists think the most important variable mosquitoes rely on when choosing one person over another are the chemical compounds produced by the colonies of microbes that live on our skin.
“Bacteria convert the secretions of our sweat glands into volatile compounds that are taken through the air to the olfactory system on the head of the mosquitoes,” Van Loon told Live Science.
These chemical bouquets are complex, including upward of 300 different compounds, and they vary from person to person based on genetic variation and environment.
“If you compare a father and daughter in the same household, there can be differences in the ratios of the chemicals the microbes are making,” said Jeff Riffell, an associate professor of biology at the University of Washington who has studied mosquito attraction.
For instance, men with a greater diversity of skin microbes tended to get fewer mosquito bites than men with less diverse skin microbes did, a 2011 study in the journal PLOS ONE found. Moreover, men with less diverse microbes tended to have the following bacteria on their bodies: Leptotrichia, Delftia, Actinobacteria Gp3 and Staphylococcus, the researchers said.
In contrast, men with a diverse array of microbes tended to have the bacteria Pseudomonas and Variovorax on their skin, that study found.
Subtle differences in the composition of these chemical bouquets can account for big differences in how many bites a person gets. The composition of those microbial colonies can also vary over time in the same individual, particularly if that person is sick, Riffell said.
We don’t have much control over the microbiomes on our skin, but Riffell did offer some advice based on his research.
“Mosquitoes love the color black,” so consider wearing something lighter at your next cookout, he said.

Pigs, likely cause of another pandemic – Chinese Scientist says

Why Do Some People Always Get Bitten by Mosquitoes, While Others...

Gov. Obaseki disqualified as Screening Committee ‘could not ascertain the authenticity...